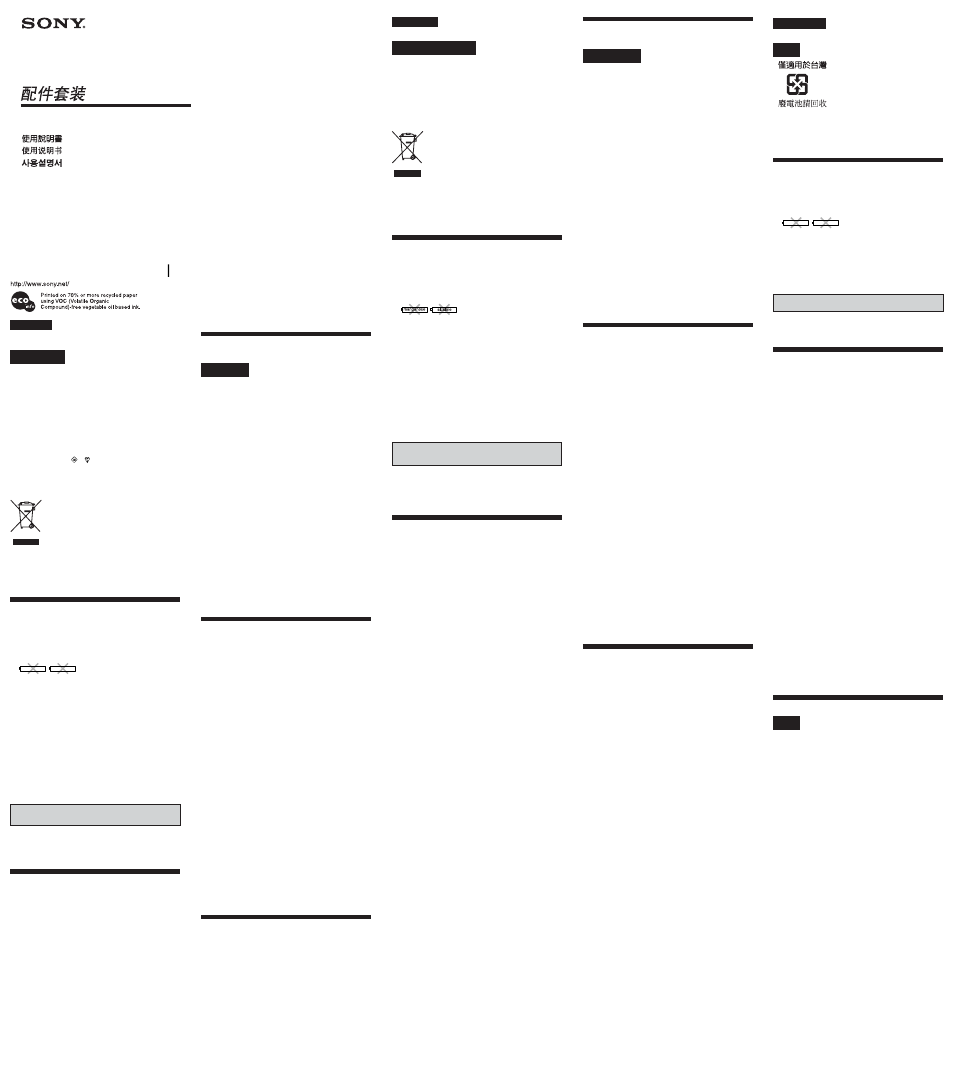 Notes on using the battery charger

• The battery charger is not a dust-proofed, moist-proofed, or water-

• Temperature of the charging environment

Do not install or store the battery charger in locations with the following
conditions:
– Locations with extremes of temperature

In direct sunlight near heat-producing devices or in closed
automobiles. The ambient temperature may be very hot, causing
deformation or malfunction of the battery charger.

– Do not jar or drop the battery charger.
– To avoid possible electrical interference, it is desirable to charge the

batteries away from televisions or AM radio tuners.

battery charger because a short may occur.

the connecting part of the battery charger does not get damaged.

wipe the cabinet with dry cloth.

– Do not use alcohol, thinner, benzine, etc. to clean the cabinet. Using

these chemicals may damage the cabinet.

– If you use a chemically treated cleaning cloth, follow its instructions.
– Do not spray volatile material such as pesticide on the cabinet. Do not

let rubber or vinyl touch the cabinet. Doing so may damage the
cabinet.

If any difficulty should arise, unplug the battery charger and contact your
nearest Sony dealer.

Follow the instructions below to prevent
the occurrence of death or serious injury
resulting from fire or explosions:

To avoid the danger of leakage, internal heat build-up or explosion,
please keep the following in mind.
• Charge the batteries with a Sony-specified battery charger. Do not

charge the batteries with any other battery charger.

• Do not solder, modify, rebuild, or dismantle the batteries. Also, do not

dispose the batteries in a fire, do not heat them and do not short the
terminals.

• If the liquid leaking from the batteries gets in your eyes, wash your eyes

out with clean water, then see a doctor for the proper treatment
immediately.

To avoid the occurrence of death or serious injury resulting from fire,
please take the following precautions.
• Be sure to insert the batteries with the correct 3/# polarities.
• Do not allow any metal objects to come into contact with the 3/#

terminals of the batteries. Also, do not transport or store the batteries
with metal objects like necklaces or hairpins.

• Do not strip, peel off or damage the outer covering of the batteries.
• If the liquid leaking from the batteries gets on your hands or clothing,

wash it off immediately with clean water.

do not use them.

To avoid injury, please take the following precautions.
• Do not mix or use dry cell batteries, capacitors, other types of batteries

or other brand's batteries with the specified Sony batteries.

Notes
• Before using the batteries for the first time, be sure to charge them.
• After rechargeable batteries have been fully charged, quickly remove

them from the charger. If you allow them to remain in the charger for a
long time, the performance of the batteries may deteriorate.

• At the time of purchase, or when the rechargeable batteries have not

been used for a long time, they may not be fully charged. This is typical
of this type of battery, and is not a malfunction. If this happens,
repeatedly using up the battery fully, and then recharging it should
correct the problem.

• Even when rechargeable batteries are not being used, they lose their

charge naturally over time. It is recommended that you recharge the
batteries just before using them.

• If you recharge the batteries before fully using up the existing charge,

the so-called memory effect* can occur, and the low battery warning
will be triggered sooner than expected. Charging the battery after fully
depleting the existing charge should correct the problem.

* The “memory effect” - the situation in which a battery temporarily

accepts a less than full charge.

Charging
• Charge the battery fully before you use them.
• The battery have only a small charge when shipped from factory.
• The battery may be discharged during storage.

Battery life
• The colder it gets, the more battery performance decreases, and the

shorter the length of time the batteries can be used.

place, the batteries may leak.

Care and maintenance
• Please be sure to keep the battery terminals clean.

When you have not used the batteries for a long time, or when the
terminals have become dirty, please wipe the 3 and # terminals of the
batteries clean using a tissue, etc., before using them.

them in the battery case.

Design and specifications are subject to change without notice.

Before operating the product, please read this manual thoroughly and
retain it for future reference.

To reduce fire or shock hazard, do not
expose the unit to rain or moisture.

To avoid electrical shock, do not open the
cabinet.
Refer servicing to qualified personnel only.

NOTICE FOR THE CUSTOMERS IN THE UNITED KINGDOM
A moulded plug complying with BS 1363 is fitted to this equipment for
your safety and convenience.

Should the fuse in the plug supplied need to be replaced, a fuse of the
same rating as the supplied one and approved by ASTA or BSI to BS
1362 (i.e., marked with

or mark) must be used.

For the customers in Europe

Disposal of Old Electrical & Electronic Equipment
(Applicable in the European Union and other European
countries with separate collection systems)
This symbol on the product or on its packaging indicates
that this product shall not be treated as household waste.
Instead it shall be handed over to the applicable collection
point for the recycling of electrical and electronic
equipment. By ensuring this product is disposed of
correctly, you will help prevent potential negative
consequences for the environment and human health,
which could otherwise be caused by inappropriate waste
handling of this product. The recycling of materials will
help to conserve natural resources. For more detailed
information about recycling of this product, please contact
your local Civic Office, your household waste disposal
service or the shop where you purchased the product.

Plug the appropriate end of the mains lead into the battery charger,
then plug the other end of the power cord into the wall socket.

Insert the batteries into the battery charger compartment
properly.

While charging and right after having the CHARGE lamp turned off,
the batteries are hot. Be careful.

When unplugging the power plug, be sure to hold the plug. Do not
pull on the cord.

Do not connect the battery charger to a voltage adaptor (travel
converter) for overseas travel. This may result in overheating or
other malfunction.

• When charging, place the battery charger near the wall outlet. Note that

objects into the charger.

• Do not place the charger near water.
• Do not use the battery charger in environments with excessive

• Make sure your hands are completely dry before touching the battery